An Amazing Story: Finding the Reincarnation of Tenga Rinpoche, Part 2

An Amazing Story: Finding the Reincarnation of Tenga Rinpoche Part 2 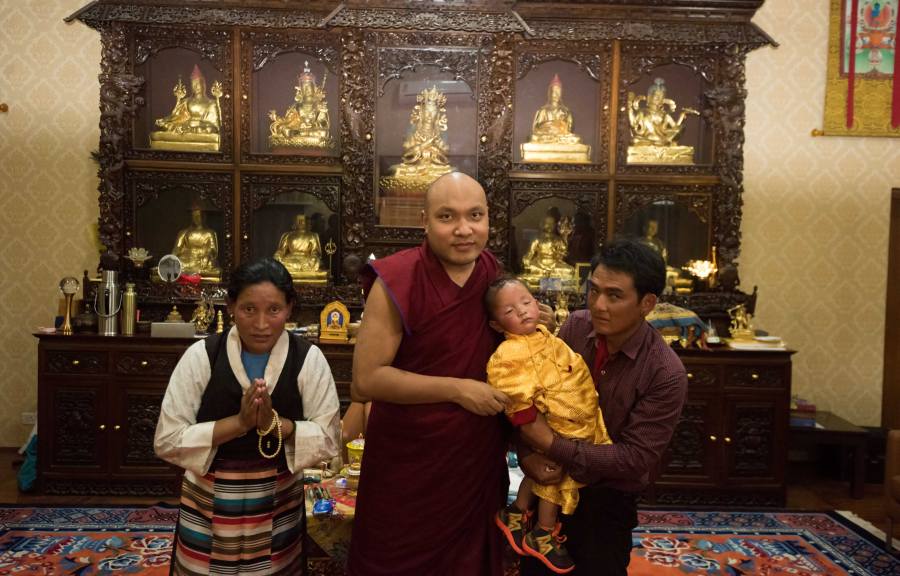 The second time that His Holiness gave them information about the yangsi was during these ceremonies at Vajra Vidya Institute. The Karmapa arrived here on March 20, 2016 from Bodh Gaya, and on March 21, 2016, he began the three days of pujas in the radiant shrine hall of the Institute.

Two special altars had been beautifully arranged by the Karmapa himself: one for the Guru Yoga of Karma Pakshi in the morning and another for the practice of the Five Tseringma sisters in the afternoon. Said to reside in the Himalayas, the five sisters are protectors of the Kagyu lineage, and the central Tseringma is also a lineage holder of Milarepa’s Dharma teachings. In particular, Tseringma is considered the special spirit that has dominion over the area of Nubri.

These two practices of Karma Pakshi and Tseringma are the same ones that the Karmapa led in Bodh Gaya during the annual nuns’ gathering. In Sarnath, the rituals were augmented with copious offerings and continued for three days, finishing on the auspicious full moon of the second Tibetan month. The Karmapa had remarked about these special pujas, “At this time perhaps I will see the yangsi more clearly. ” On third day of the practices, March 23, 2016, as he left the shrine hall, His Holiness gave Tempa Yarphel a folded paper. When he opened it, he discovered the drawing of a house with a large boulder and an indication of the direction in which the door faced. Written at the top was “Year of the Horse.”

During an audience on the evening of that day, the search team requested further advice and clarification from His Holiness. The Karmapa told them that they did not know how to search in Samdo: “It could be that the mother went as a bride to another village or that the father went as a groom elsewhere. They will probably have a child. Look for them.”

So the search team returned to Samdo in Nubri, and this time Khenpo Garwang asked the head of the village and the resident lama, Lama Urgyen, to call a big meeting with the local villagers. Under a clear mountain sky, they all gathered and Khenpo Garwang asked about family members who had moved to other places and who had children. The villagers were very cooperative and even called abroad to relatives in Europe, America, and Australia to see if they had such a child but they only found a young girl born in the Year of the Horse, not a young boy.

Three days passed by, and then late in the day around 5:30, the General Secretary felt like having something to drink, so he walked over to a small shop where a woman was selling tea, coffee, and some snacks. He bought a cup of coffee and while he was drinking it, as is the custom in remote mountain areas, the owner struck up a conversation. (He later discovered that she was a sister of Lama Urgyen and named Sithar.)

“Well, did you find the child?”
“No,” the General Secretary sighed, “We’ve looked everywhere and could not find him.”
She asked him, “Did you know that my older sister’s daughter has a boy born in the Year of the Horse?”
“Where is she?” the General Secretary quickly questioned.
“My sister moved to Rö as a bride.“
“Where is this place?”
“Oh, you walk down the mountain about three or four hours and you’ll get there.”
The General Secretary was as surprised as he was elated. He paid for his coffee, leaving it half finished, and went as quickly as he could to find the search team in their guesthouse. Khenpo Garwang remarked, “That’s quite strange. We had so many meetings and no one mentioned this child. Let’s go tomorrow morning as early as possible. Since Lama Urgyen is a respected person and a relative of the boy, it would be good to invite him to come with us.”As Lama Urgyen was staying close by, the search team went right away to see him and Khenpo Garwang asked, “Did your sister’s daughter go as a bride to Rö?”    “Yes, and my sister passed away quite some time ago,” he replied.
“Her daughter has a boy, isn’t it?”
“Yes.”
“Could he have been born in the Year of the Horse?”
“Well, it’s possible. I’ll call her.”Lama Urgyen made a phone call to the yangsi’s mother and he found out that, indeed, the boy was born in the Horse Year. Lama Urgyen was also reminded that he was the one who had made an astrological chart for the infant after his birth. The lama happily agreed to join search team on their trip to Rö.With joy and anticipation, the search team traveled on the following day to meet his sister’s grandson. After their trek down the mountain valley, the search team at last came to the house, which was known as the New House in Rö of Nubri (Nub ri ros khang gsar). When the General Secretary saw the yangsi, he thought, “This child’s eyes have a special brilliance.” The parent’s names turned out to be just as the prediction letter had indicated: the father was named Tsering Wangdu, (though he was usually called Wangdu), and he was known as Urgyen Pasang Wangpo when he was a monk for four years at Tsoknyi Rinpoche’s Monastery in Swyambhunath, which is now under Mingyur Rinpoche’s guidance and called Tergar Ösel Ling. The yangsi’s mother was called Dawa Putri, and when she was a nun at Penor Rinpoche’s nunnery in southern India, she was known as Tsultrim Chödrön. She has two older sisters and three younger brothers. It also has turned out that the mother of both Tsoknyi Rinpoche and Mingyur Rinpoche came from Rö.The parents named their boy Nyima Döndrup and he was born on the 23rd day of the tenth Tibetan month in the Year of the Horse (December 14, 2014) at 11:30pm. The previous Tenga Rinpoche had passed away in the early hours of March 30, 2012, so he did not wait long to take rebirth, just as the Karmapa had predicted. By Tibetan counting, the yangsi is four years old since he was born in the tenth month, and whenever Losar (the New Year) comes around, everyone is considered a year older no matter when they were born. So when the Yangsi was two months old, he was already considered to be a one-year old. Then two years passed, making him three, and this year Losar just happened on February 27th, so he turned four. However, in western terms he is only two years and some three months old.The search team took many photos, and while they were visiting, the young boy grabbed his mother’s chupa several times, saying something to her in the local Nubri dialect. When Tempa Yarphel asked Khenpo Ösung for a translation, it came out as a traditional gesture of welcome, “Pour them some tea.” Previously, when the team had asked about the prediction letter and the number of family members, the Karmapa had said that there could be four and a half, clarifying that “half” might mean that the mother was pregnant. When the team came to visit, however, the mother said her periods were regular, so she was not pregnant at that time. Yet there were four members in the family: the two parents, the yangsi, and his sister Kelsang Chökyi who was two years older. The General Secretary further asked the parents about the boulder that was in the Karmapa’s drawing. They replied that their old house had a boulder, but they had taken it down and broken up the boulder to use in building a new home with several extra rooms, thinking that they might open a guesthouse. While staying in Rö, Khenpo Garwang contacted His Holiness to give him a detailed report, including the fact that the “half” family member was missing. After three days, His Holiness responded and asked Khenpo Garwang to return to Bodh Gaya, India and the others to return to Kathmandu. Once back in India, Khenpo Garwang went over all the details with His Holiness and showed him the photographs of the family, their dwelling, and the stunning landscape, but at this point, the Karmapa stated that he did not have anything to say about Kyabje Tenga Rinpoche’s reincarnation.

Editors note: This text was done by Michele Martin who conducted interviews with Tempa Yarphel, the search team and others. Mrs. Michele Martin allowed us to use it for our website. We are very happy about her generous offer and like to express our deep gratitude. Thanks a lot!An Amazing Story: Finding the Reincarnation of Tenga Rinpoche Part 2