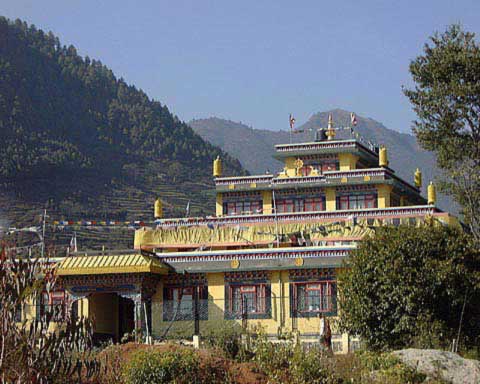 In 1996 the meditation centre Clear Light was founded in Pharping, 20 km north-east of Benchen. Under the guidance of Sangye Nyenpa and Tenga Rinpoche 16 monks participated in the first retreat at Clear Light in 1999.
The Retreat is a traditional three years training to become a lama. During this time, the monks devote themselves entirely to the study of the religion without any distraction. After 3 years, 3 months, and 3 weeks – on a lucky date – the first group of lamas left the retreat.
In the same year, July 2002, a second group of 19 monks started their retreat at Clear Light. Two of the first lamas came to Europe in 2003. Together with disciples of the two Rinpoches, they study and practice  Tibetan Buddhism in Karma Tegsum Tashi Ling in Italy and in Benchen Phuntsok Ling centre in Belgium, near the German border. The centres are places where western Buddhist can study and practise and they are open for people interested.

Since then two more retreats have been performed.