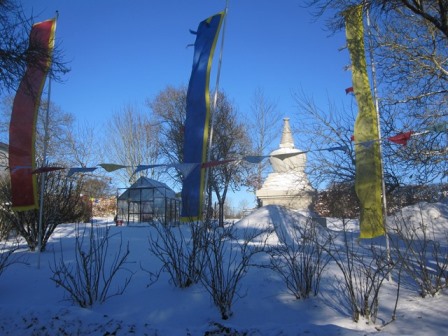 After a longer period of waiting the building permission for the Stupa in Allmuthen was finally given. The actual construction work started just prior to the summer course 2014. However, due to the construction company's annual holiday break there was a four week building break until mid August 2014.
Simultaneously all the necessary rituals were performed by our resident lamas recently with the support of Khenpo Gawe Nyima and Drubpön Döndrub Tashi when the two mandalas etc. were placed in the Stupa.

During the summer course 2014 some Sangha members carved the so called "Sogshing", the approx. 5 m long center pole,  which will be core of the Stupa and will be placed in the center of it. The wood was obtained from the Thuja tree which grew next to the Stupa building site in our garden. It was beautifully ornamented and prepared according to the traditional procedures by our resident lamas. 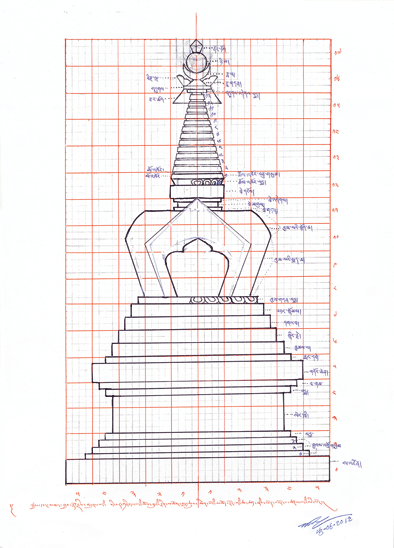 To enshrine Kyabje Tenga Rinpoche's relics we will be building a stupa at Benchen Phuntsok Ling, Allmuthen. It will have the form and the structure of the "Enlightenment Stupa".
H.H. Karmapa sent a personally signed construction drawing to Benchen Monastery in Nepal indicating that this type of stupa should be constructed for Kyabje Tenga Rinpoche's relics. This particular drawing of the Enlightenment Stupa is based on instructions by the 15th Karmapa, Khakyab Dorje, contained in his collected works, the 'Khakyab Dorje Khabum'.
The location for the stupa in Benchen Phuntsok Ling has been decided and Drubwang Sangye Nyenpa Rinpoche will perform all the necessary rituals preceding the actual building process during this year's summer course. (Dimensions of the stupa will follow).
The costs are estimated to be some 35.000 Euro. We aim to begin with the construction this year and ask all of you to support this project financially.

For any contribution please use the bank account here.
Please mention the purpose: Stupa
Thank you!

The origin of the stupa (tib. Chörten mChod rten) can be traced to ancient Vedic India. It was customary to put the ashes of cremated bodies into tumuli.
The Buddhist stupas, however, are not mere elaborations of the burial mounds. They function as a symbolic representation containing relics, not as a container of relics that has symbolism. The relics sanctify the structure endowing it with the consecrated quality that the living being (of whose these are the relics) possessed. Some Buddhist texts refer to stupas built containing the relics of past Buddhas. So one can assume that stupas existed already during Shakyamuni Buddha's life, although in much more simple forms than we know today.

Consecration of the Place

On August 3, 2013 during the summer course Drubwang Sangye Nyenpa Rinpoche performed a ritual for the consecration of the place where the stupa is going to be build in Allmuthen. Now we are waiting for the building permission to start the construcution. Please click on the pictures to enlarge.

As you all know a stupa to enshrine the precious relics of Kyabje Tenga Rinpoche will be build in Benchen Phuntsok Ling, Allmuthen.

It is necessary to fill such a stupa with a lot of tsa tsas, mantra rolls and other objects. During two weekends at the end of 2013 during a workshop with Lama Ngawang Tsultrim 216 (2*108) tsa tsas together with a lot mantra rolls were prepared to fill the stupa.

Everybody was welcomed to join these workshops.