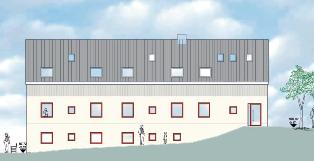 During the summercourse 2007 Tenga Rinpoche initiated the Sangha House Project.

This new building will serve a variety of purposes. During summercourses with its very often unstable weather conditions it will be accomodation especially for the elders and mothers with little children.

During the year it will be much easier to give Dharma courses due to the extra accomodation. Furthermore there will be extra retreat facilities.

It was decided that the Sangha House should be erected on the grounds of the old “bull shed”.

After the first application of the building permission we received a positive response of the regional goverment in Eupen. Detailled construction plans were presented and beginning of December 2008 we received the last notification from Büllingen municipality.

Some minor changes in the building plans were necessary. But with the drive of our architect these changes could easily be implemented.

Therefore the construction company could start the work as soon as the weather got a bit warmer in spring 2009.

Have a look at the building progress. 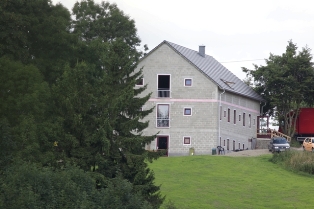 The plans for the Sangha House also include a heating solution for the overall project (i.e. old main house, new Lhakhang/Sertok project etc.).

The collected financial resources so far enabled the construction of the (“closed”) shell of the building. This was realized short before the summer course 2009 started.

It was possible that the child care could  already use part of the new building for their needs.

However, to start the interior works of the building new financial resources are needed. If you like to support you are most welcome.